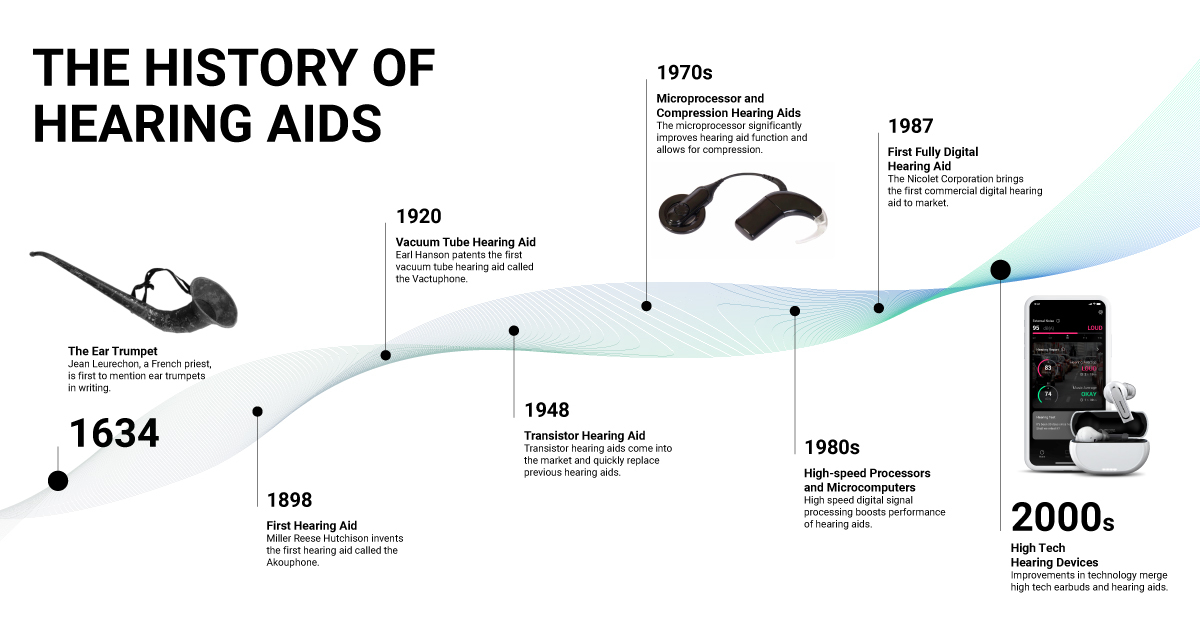 Hearing aid history is filled with inventions, from the ear trumpet in the 17th century to the high-tech hearing aids and amplifiers (Personal Sound Amplification Products, or PSAPs) we have today.

As the author Arthur C. Clarke once said, “Any sufficiently advanced technology is equivalent to magic.” Although this isn’t quite true, some people benefit so much from their hearing aid or amplifier that it can feel like magic.

It’s time to give these gadgets the praise they deserve and take a look at the hearing aid history behind the modern devices we use now.

What is a Hearing Aid?

Hearing aids are medical devices designed for people with hearing loss. As they can significantly improve the hearing of many individuals, they tend to be the go-to solution for those diagnosed with hearing loss.

Although they can’t naturally restore normal hearing, they can boost certain frequencies to aid hearing for allow (while worn) the user to somewhat regain their lost hearing.

Hearing loss affects people far and wide, and with one in eight people in the U.S. aged 12 or over experiencing hearing loss in both ears, it’s no wonder that even big-name celebrities such as Halle Berry and Jodie Foster use hearing aids.

Those that struggle with untreated hearing loss can find their daily life increasingly difficult. Even simple interactions such as talking to a store assistant and asking for directions become tiresome. This can lead to a sense of loneliness and place a strain on relationships with family and friends.

This makes it all the more startling that amongst all adults aged 70 and older with hearing loss who could benefit from hearing aids, fewer than 30% have ever used them.

When Was The Hearing Aid Invented? Enter: The Ear Trumpet

Unsurprisingly, the technology behind hearing aids went through many revisions before ending up as the device that we recognize today. Hearing aid history has moved so fast it’s sometimes difficult to remember the rudimentary foundations on which it started.

The first literal hearing aid was the ‘ear trumpet’ – a tubular device, designed to funnel sound waves into the ear. Unlike hearing aids today, these large funnels were made from materials such as wood, animal horns, snail shells, and sometimes silver or sheet metal.

Their use dates back to the 17th century, where Jean Leurechon, the French priest and mathematician, is credited with the first mention of the instrument in his 1634 work Recreations mathématiques.

Although the modern hearing aid and the ear trumpet seem worlds apart, it’s tempting to draw some similarities.

Interestingly, conical ear trumpets were custom-made by specialist instrument makers as bespoke pieces for each client. Although this isn’t the case for hearing aids in 2020, it goes to show that there was some recognition of the need to personalize each device in a similar sense to how hearing aids are fitted to each individual, calibrated, and set to boost certain frequencies for maximum effectivity today.

It seems like they were onto something with this early invention, but we’re glad the ear trumpet remains a remnant of hearing aid history.

Who Invented the First Hearing Aid?

Although ear trumpets may have looked aesthetically impressive, there was an undeniable need to move away from these passive amplification cones. So, inventors started to work to create something better.

In 1898 Miller Rees Hutchinson invented the Akouphone, the first portable hearing aid using a carbon transmitter. Through the use of the carbon transmitter, an electric current could take a weak signal and turn it into a strong signal.

Consisting of a separate microphone, amplifier, headphones, and battery (which didn’t last very long), the device was clunky and difficult to use. Add a steep retail price and it’s no wonder only a few people could use the Akouphone.

Despite this, the device was an incredible success – it was praised as a “miracle” by American press, and it Queen Alexandra of Denmark was so happy with the results she invited him to her husband’s coronation ceremony!

The lucrative prospects of hearing aids gained attention from large-scale manufacturers and engineers who wanted to improve the device. This lead to the increasingly small, widely available devices used by millions around the world today.

Of course, this didn’t happen overnight. Many technologies were tried and tested throughout hearing aid history.

In 1920, Naval engineer Earl Hanson patented the first vacuum-tube hearing aid named the Vactuphone. The device used the telephone transmitter to convert speech into electrical signals, to then be amplified through the receiver. It was so successful that vacuum tube hearing aids were available on the U.S. market from 1923.

As is often the case with technology, competition to develop the best miniaturization techniques aided development. Devices became smaller and smaller throughout the 1930s, were sold as wearable from 1936, and quickly gained popularity amongst the public.

At this time, the amplifier and batteries still needed to be worn around your neck and the microphone was hand-held (with its size proportional to your level of hearing loss!). This meant that conversations had to be had news reporter-style – quite a funny thought for hearing aid users today.

Next, we’d like to introduce a vital player in hearing aid history; transistors. They came onto the scene in 1948 and quickly replaced vacuum tubes as they were demonstrably superior on many accounts. They required less battery power, produced less distortion and heat than vacuum tubes, and importantly, were smaller.

However, manufacturers were so excited about the benefits transistors seemed to provide that they did not carry out adequate tests on their transistor hearing aids. They paid the price for their hastiness when devices seemed to die a few weeks after a customer’s purchase due to dampness stopping the transistor from working.

This led to the development of a protective coating and the silicon transistor, to combat problems caused by body heat.

The microprocessor was created in 1970, speeding up the journey towards the miniaturization of the hearing aid and bring hearing aid history into modern times. Edgar Villchur, a researcher, took this invention and went even further to ensure better hearing for those who needed it.

The 1970s saw the development of high-speed digital-array processors to be used with minicomputers. However, it was only in 1982 that an all-digital, real-time, array processing hearing aid was developed at the City University of New York as a research tool for the exploration of digital signal processing.

Although it was a big step forward in hearing aid history, it was a rather bulky device. Inside, they had to pack in a minicomputer and a digital array processor, as well as an FM transmitter and receiver.

The 1980s ushered in the development of digital chips for high-speed digital signal processing. These enabled fast processing, but were too large and consumed too much power to be used in wearable hearing aids.

Over time, technology reduced these drawbacks to practical levels for a digital hearing aid, most notably through the work of Engebretson, Morley, and Popelka at the Central Institute for the Deaf (CID).

When 1987 rolled around, the Nicolet Corporation brought the first commercial digital hearing aid to market, and surprisingly, to little commercial success. Nevertheless, Nicolet did prove one thing to the market – feasibility, and other companies took notice.

The race to develop viable digital hearing aids that would also be commercially successful had begun. It was an exciting time in hearing aid history. Developments occurred at a rapid pace, and major hearing aid companies introduced hybrid instruments using analog amplifiers, filters, and limiters which were controlled digitally.

Moving away from hearing aid history and into the 21st century, we can see that hearing aids have come to be much more widespread. There’s no doubt that their long history of technological modification and continued refinement is to thank for this. Many devices use modern technology such as Bluetooth connection and rechargeable batteries, offering convenience to the consumers.

Along with these advances, the emergence of new options such as hearing amplifiers and PSAPs (Personal Sound Amplification Products) offer to the consumer an even wider range of hearing device options with different capacities.

Many of these devices are functionally versatile and have excellent efficiency, allowing for features such as effective ambient noise control, suppression, and isolation. In addition, their lower price and sleeker, more modern designs are a big pull for many.

Although some claim devices such as hearing amplifiers and PSAPs pose a threat to the hearing aid market, this shouldn’t be the case. Whilst they enhance your experience of environmental sounds and are useful in certain instances, they should not serve as replacements for hearing aids if you suffer from moderate to severe hearing loss. They serve two different purposes and should be seen more as partners working together to enrich a field, not rivals fighting over it.

The Future of Hearing Enhancement

At Olive Union, we have a mission: to make hearing devices like glasses – i.e. removing the stigma around them and making them a personalized, normalized part of everyday life.

With recent technological developments, hearing enhancement devices are only becoming more effective and more widely used; the Olive Smart Ear is one example of such a PSAP. Our CES award-winning Olive Smart Ear offers unrivaled sound amplification, background noise reduction, and personal sound calibration – all for a fraction of the price of traditional hearing aids.

For those with hearing loss who require a stronger hearing enhancement, the Olive Pro is a revolutionary 2-in-1 Hearing Aid & Stereo Bluetooth Earbuds. We’ve combined a medical device with a HiFi music listening device for a single, sleek and stylish solution at an incredibly affordable price of $199.